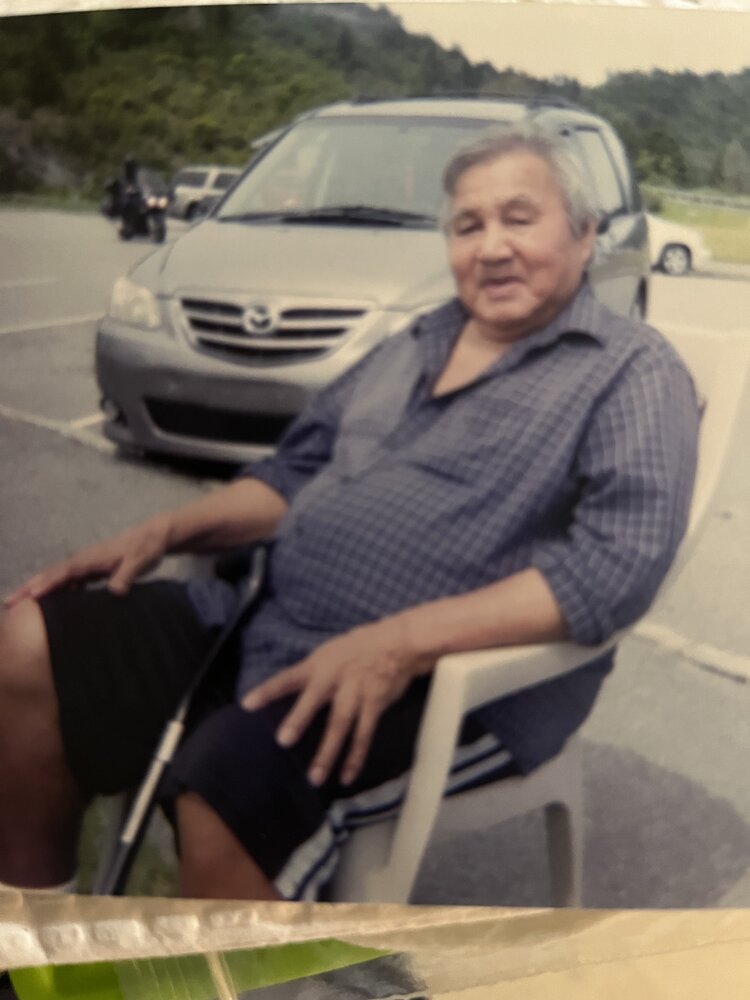 Please share a memory of John to include in a keepsake book for family and friends.
View Tribute Book
John Adam Squirrell, age 85, of the Yellowhill Community, passed away unexpectedly on January 3, 2022, at Swain County Hospital. He is survived by his loving Wife of 55 years, Yahnie Squirrell. Children; Angela Squirrell of Cherokee, Charlene Mejorado of Hendersonville, NC. And Joseph Smith (Cherry) of the home. 9 Grandchildren and 13 Great-Grandchildren. Brothers, George Squirrell, Robert Squirrell, both of Cherokee, NC and Nephews who he thought of as Brothers, Fred Squirrell and Herb Squirrell. Special Friend, Jimmy Muskrat of Stillwell, OK., and his many cats, whom he loved to take care of. John was preceded in death by his Parents, Shepherd and Mianna Squirrell. Brother, Joshua Squirrell. Sisters, Mary Squirrell and Irene Martin. Niece, Arlene Squirrell and Nephew, Joshua Squirrell Jr. John grew up in the Yellowhill Community with his brothers and sisters. He loved to run and participated in many road races in the area. As a young boy, he was coached by the late Robert Youngdeer and achieved Golden Glove status in boxing. Many mornings he would be seen running up to Stoney Curve and back down before daylight to begin his day. He also played stickball. He married Yahnie Littlejohn in October of 1967; they were married 55 years. He became a stone mason following in his Father, Shepherd’s footsteps. He would put in a long day's work, come home, tend the garden and coach his daughter's softball team. A stroke in 2001 finally slowed him down and he spent the rest of his time enjoying life at home sitting on the porch listening to gospel songs and watching his Grandchildren play in the yard. He also found Jesus, was an avid church goer and was baptized at Cherokee Baptist Church. He would enjoy going to different churches to sing praises to God. John was always willing to go sing at set-ups and funerals. Many loved to hear him sing as he sang from the heart. He blessed many lives and will be greatly missed by Family and Friends. A visitation will be held on Thursday, January 5, 2022, at Yellowhill Baptist Church beginning at 6:00pm. John will remain at the church until the hour of service on Friday, January 6, 2022, beginning at 1:00pm with Foreman Bradley and Danny Sweet officiating. Burial will be in the Yellowhill Church Cemetery. Pallbearers will be, Jack Smith, Joeseph Smith, Greg Smith, Adam Saine, Aaron Squirrell, Fernando Mejorado, Fred Squirrell and Herb Squirrell. Long House Funeral Home Assisted the Family with final arrangements.
To send flowers to the family or plant a tree in memory of John Squirrell, please visit Tribute Store
Thursday
5
January

Look inside to read what others have shared
Family and friends are coming together online to create a special keepsake. Every memory left on the online obituary will be automatically included in this book.
View Tribute Book
Share Your Memory of
John
Upload Your Memory View All Memories
Be the first to upload a memory!
Share A Memory
Send Flowers
Plant a Tree